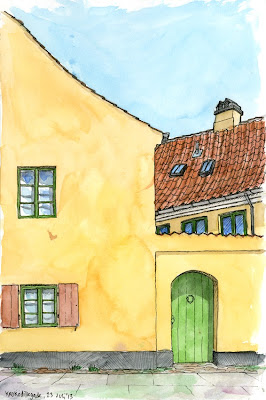 My very close friend Hans Christian, mostly known as Hubbi, had this to say about my sketch, or perhaps rather on the area where it was drawn:


As always you have picked an interesting motive.

Firstly, it is of course an interesting historical building in an interesting part of Copenhagen. The easily recognicable yellow walls signifies that we are in the older section of Nyboder, where the houses with the yellow walls were originally built for the sailors of the Royal Danish Fleet. Most of the houses have since been changed for myriads of reasons over the years, but the yellow walls remain. Originally the houses were split into sections that would have looked a bit cramped to us, but were fairly spaceous for their time.

One peculiar thing is that there were no stairs between the floors. The inhabitants made do with a rope hanging through a hole. - They were sailors and needed to keep their climbing skills honed when on land and this was seemingly the easiest way. - I imagine it also took up less space than stairs or even a ladder and probably saved on building costs as well.

Its a little piece of left over history in an otherwise busy Copenhagen, though I fear that no ropes or holes are left, as the modern Danes are sadly all weaklings that dislike climbing a rope to get to the second floor.
Indsendt af Tomas Bjornsson kl. 13.21